In 2013, after living in Europe more than 20 years, Peter and Solvei Stohl moved back to Minnesota, settling in Saint Paul. During those earlier years they served in eastern Europe and central Asia as Christian family counselors. From 2005-2013 they lived in Kaunas, Lithuania and worked with the Lithuanian Family Center. In Kaunas Peter and Solvei were inspired to return to their former styles of drawing and art photography. (They believe their art has kept them sane.)

PETER does ink and watercolor drawings. In college he studied art and art history (St. Olaf College, Northfield, MN 1973-77). He studied one semester in Florence, Italy. He was very much inspired by the paintings, sculptures, architecture, and beauty of the city. He likes realism and likes to work on paper. He developed a technique of combining watercolor and ink hatching. He likes the texture of the ink hatching, plus he can achieve rich, dark tones that he cannot create with watercolor alone. 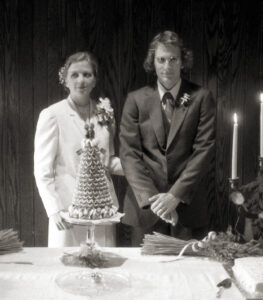 In 1979 Peter and Solvei met working in an art gallery in Minneapolis, MN. They married in 1980. Over the next few years, they produced and exhibited their work. Peter worked on a series of still life drawings, interiors, and neighborhood landscapes and was represented at Groveland Gallery in Minneapolis. Solvei studied more B&W photography and worked in a darkroom printing photos by hand. She began to find her own style of design and simplicity, which has grown and developed over many years.

In 1983 Peter and Solvei changed careers. They studied and trained to become Christian missionaries and eventually family counselors. From 1987-1990 they lived in Germany, serving as missionaries in eastern Europe. From 1992 to 2005 they based in western Europe and traveled 6 months of the year to Lithuania, Russia, and Kazakhstan. They served as Bible school teachers and counselors. They liked their work but were becoming weary from the travel.

In 2005 the Stohls moved to Kaunas, Lithuania. They continued to serve as counselors, partnering with the Lithuanian Family Center, and traveling less for their work. Living in the center of the Old Town, they found refreshment in their surroundings and the views from their third story windows, which led to them to begin capturing their neighborhood visually.

Peter: There was a unique beauty in Kaunas among the vintage buildings and architecture. The lighting also seemed to be vibrant in the summertime because the Old Town is situated between two rivers. In 2006 I was so inspired by the beauty and clutter around us that I started drawing again. While living in Kaunas I completed a series of drawings of scenes from our neighborhood. I like to portray my scenes as still lifes. I find myself drawn to the design, color, lighting and shadows of a particular scene. It is refreshing for me to recreate this atmosphere or mood on paper.

Solvei: From 1987-2005 I took a lot of color slides and photos, primarily documenting our work and travel. However, in 2007 I decided to get back into art photography, which I enjoyed in the early 1980s, this time shooting color digital images.

Living in Lithuania I was inspired to see artistically. I worked on a series of art photos of the Kaunas Old Town. I loved the textures around us: the cobblestone streets, the brick, stone, and stucco buildings, the rooftops with multi-vented chimneys. I did a lot of street photography, which I came to love. When photographing people, I like to catch a moment of action where there is a strong sense of design and rhythm, or when I see an expression that is true. I am drawn to the lighting and design of a scene and am truly satisfied when my finished print looks more like a painting. I enjoy discovering “paintings” ready to be captured.

During these years living in Lithuania the Stohls primarily worked as marriage and family counselors in Kaunas. They also traveled twice each year to Prague, Czech Republic from 2010-2013 to hold counseling seminars and to train a small group of lay counselors within a Czech Protestant denomination.

Even though Lithuania was beautiful, it was also a heavy country with much depression, suicide, and alcoholism. It was not an easy, nor friendly, place to serve, and the Stohls felt that there was not enough support for their work to continue serving in such a capacity. However, they were successful in helping numerous people deal with their outstanding issues and get on with their lives. They originally planned to stay in Kaunas till 2015 but decided it would be healthier for them to retire early from ministry and move back to the US.

In 2013 Peter and Solvei left Lithuania and settled in Saint Paul, MN. Reentry into US life was a difficult transition. Peter worked part time as a greeter/barista in a coffee shop for four years and retired in 2017. Solvei manages their art business, “Stohl on Paper,” which is based at their studio/gallery in the Northrup King Building in Northeast Minneapolis.

The Stohls live in the historic Cathedral Hill district of Saint Paul and are inspired by their neighborhood and surroundings. They like to capture everyday life, and try to produce simple, classic images that draw the viewer in.

In 2018 Peter started doing some larger format drawings and also began to draw objects and scenes from their history overseas.

In 2019 Solvei began doing Linocut printmaking. One reason for this change is that photography trends on social media, along with practices of altering images, are moving away from classic photography. She also likes to draw again and to work with her hands. She finds Linocut printing fun and challenging. (Solvei is not finished with photography but is devoting more of her attention to work in a new medium.)

In 2020 Peter and Solvei expanded their studio and workspace.